Welcome to the fourth installment of this year’s Oscar countdown series. We’re going to try to make an annual tradition of having a series of posts looking back on past Oscar winners in specific categories. To kick this off, this year we are starting with Best Picture winners. Each week between now and the Oscars, one or both of us will look back on a Best Picture winner and discuss some things we like about it, some things we don’t, and whether, now that time has passed, the film has really held up as the best of the year it was released. Our fourth Best Picture winner, randomly selected, is Terms of Endearment.

Terms of Endearment was released in 1983 to box office success, critical acclaim and Oscar love. It won five awards out of eleven nominations, including Best Picture, Best Director, Best Actress-Shirley MacLaine, Best Supporting Actor-Jack Nicholson and Best Adapted Screenplay. Now, this post is going to be a little different from my previous Oscar countdown installments so far, because I haven’t seen any of the other films that were nominated for Best Picture along with Terms of Endearment. Consequently, this will be more of a straightforward film review. Also, since this is a 37 year old movie, there will be a lot of spoilers.

Terms of Endearment follows three decades in the often-strained relationship between Aurora Greenway (Shirley MacLaine) and her daughter Emma (Debra Winger). The script, which writer/director James L. Brooks adapted from the Larry McMurtry novel of the same name, deftly balances raunchy comedy, thoughtful romance, observational family drama and a tear-jerking twist. Every time I watch this it I am amazed at how much time is covered and how many relationships are thoroughly explored in a film that, by today’s standards at least, is average length.

James L. Brooks proves within the first minute or so that he is a pro at introducing characters. We are introduced to Aurora and Emma very early in their relationship. Emma is an infant sleeping in her crib, and Aurora enters the darkened room while her husband tries to assure her offscreen that the baby is fine. Aurora is convinced Emma is dead though, and shakes her awake until she begins crying. Satisfied, Aurora mutters “that’s better” and leaves the room. That’s the dynamic between mother and daughter for the rest of the narrative: Aurora and Emma remain close, but Aurora constantly meddles and tries to control Emma, even from several states away. Of course, these characters do grow and go through changes. Emma’s almost obnoxiously positive and cheery outlook is frequently tested by her marriage and, later, an illness that still catches many first-time viewers off-guard (I was one of them about nine years ago). Aurora’s growth comes from slowly learning to let other people into her life besides Emma. Though she frequently entertains several male friends from church, all of whom are taken with her and would probably do anything for her, she’s not interested. Instead, she slowly becomes involved with her next door neighbor, a drunken, womanizing astronaut named Garrett Breedlove (Jack Nicholson) whose hot-shot days are behind him and whose time is mostly spent trying (and failing) to swim off his Dad-bod. 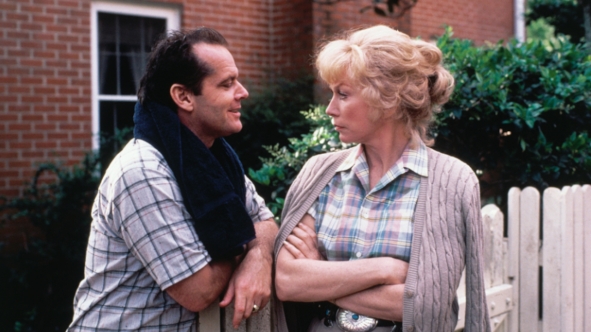 While watching this time I noticed the song that is coming from Garrett’s yard when Aurora first sees her new neighbor moving in. The song is “I Feel the Earth Move” by Carole King, which may be a bit on the nose considering we are being introduced to an ex-astronaut, but I still like some of the thought that went into choosing this particular song. The film is mostly quite subtle about reminding the audience about the passage of time. Later in the film, we can tell when we’ve skipped ahead when we notice that Emma’s kids look older, but early in the film, music acts as a cue to remind viewers where we are in the timeline. With Garrett’s introduction, for example, people who know enough about music history will know “I Feel the Earth Move” came out in 1971. That may not be as effective for a lot of viewers my age who are now discovering the film, but in 1983 it was a recent enough reference that the adult audience the film was intended for would remember when the song came out. I like when movies use diegetic cues like this to alert the audience to time rather than just putting text on the screen that says “August 1971” or whatever. Sometimes that is unavoidable, but I appreciate when directors and their crews get more creative.

On the other hand, the first five minutes of the film, because they take place during Emma’s childhood, are shot with that awful, blurry effect that directors use to make the image look like an old memory or dream. It’s an overused tactic and I hate it. It’s particularly weird here considering the linear plot structure used in the film. This is not a flashback or a dream.

In case I haven’t made it clear yet, I love the performances in this film, and I mostly love how these characters are written. They are very real and don’t always do or say things that you like or that you would expect them to say. They also make some questionable choices, but for the most part you are not being invited to judge them for their actions, and you don’t want to. That said, I’ve always thought the way Emma’s husband Flap (Jeff Daniels) was written is one of the film’s weak aspects. He’s a very simple man, and a habitual cheater, but the script and the rest of the characters around him never seem to react to him quite right or even understand him. Is he an idiot and someone who ends up the head of a college department by luck, or is he smarter than the other characters give him credit for and just makes bad choices even though he knows better? His decision to let Aurora take the kids after Emma dies makes sense. We never really see him acting like a father and he never seems that interested in what his kids are doing, but the way his character is written seems calculated just to get to that scene. Honestly, Sam Burns (John Lithgow), who Emma has a brief affair with, feels like a more well-rounded character than Flap.

The other problem with Flap is that a lot of his character development comes from what Emma and Aurora say about him, and this mainly annoyed me because they constantly belittle the teaching profession. It makes sense for Aurora to make comments like “he can’t even fail locally.” No one is ever going to be good enough for Emma as far as Aurora is concerned, but there are so many other real problems with Flap (infidelity, bad parenting, not including Emma in career and financial decisions) that it’s odd how both Emma and Aurora choose instead to talk down to his profession. Anyway, as many issues as I have with how Flap is written, Jeff Daniels plays the part well.

At the 1983 Oscars, both Shirley MacLaine and Debra Winger were nominated for lead actress, and I don’t envy the Oscar voters that had to choose between them. This is still some of the best acting I’ve ever seen, and while there are definitely iconic moments that people still talk about, the two actresses just nail every scene and nuance. Of course, there will always be people who mock aspects of the performances or the at times manipulative nature of the script. But if you can see the “give my daughter the shot!” scene or the one where Emma says goodbye to her kids, and not be impressed, I don’t know what will work for you. 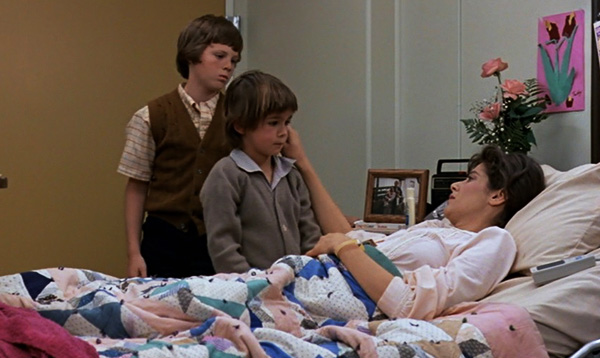 This is also the first Oscar winning turn by Jack Nicholson in a James L. Brooks film. He would later win a second (his third overall) for Brooks’ 1997 dramedy As Good As It Gets. I also recommend checking that film out. Though there is definitely some humor in it that hasn’t aged very well, the performances are worth seeing.

Terms of Endearment will certainly not meet everyone’s ideal of a great movie, but odds are if you’ve seen it, there are a lot of moments you won’t be able to forget. For me, the jokes still land (Nicholson’s delivery of a zinger about alcohol was Oscar worthy on its own) and the heartache still stings. This might be one of those films that people are quick to label as “typical Oscar movie” or “chick-flick’ (a term I truly despise), but they are missing out.

That’s all for now. We’re less than two weeks away from the 92nd Oscars. I’m really enjoying reviewing these older films, and I’m glad that next year the Oscars won’t be happening quite as early in February, because it will give me more time to write about some previous winners. Is there an Oscar winning film (any category) that you would like to see reviewed on the blog? Let us know in the comments. We’d love to start planning next year’s Oscar countdown.