Here we are at the end of another year! And what a great one it has been for film. Honestly, this list has been agonizing to write. There were so many good films this year that told important stories and I wish I could honor each and every one of them. But, alas, I have limited myself to the top ten of the year with a few honorable mentions. There are a few important films we have not been able to see yet for various reasons (our location, the holidays, etc.) and they are: 1917 and Portrait of a Lady on Fire. We will get around to it soon, but in the meantime, those will be excluded from my top ten list. As always, the list is unranked because it was hard enough to narrow this list down let alone rank them.

This is a story that really reached within and touched what little is left of my soul. As a child of divorce, this film was able to give me a sense of healing that I never really knew I could achieve. The narrative, paired with two of the best performances of the year from Adam Driver and Scarlett Johansson, gave viewers a rare glimpse into the lives of two people completely falling apart. It was both the hardest film to watch this year and the easiest. The story is so intimate it feels like you shouldn’t be watching, but at the same time you can’t turn away. Noah Baumbach was able to strike such a balance between sadness and hope in this story that it is one we will be watching for decades.

This is by far the film I am looking forward to re-watching the most (and conveniently we just got a screener in the mail). It is a comedy, a drama, and a horror film all rolled into one. It really breaks boundaries when it comes to film genres. The narrative is so intelligently written, the characters are developed in a way most films can’t achieve, and it is beautifully shot. Bong Joon-ho was able to achieve something that most directors can’t: perfection.

I am not going to lie, initially, we went to see this because we thought we would dislike it and it would be a good one to write a review for. I left the theater though in awe of what we had seen. Taika Waititi found a beyond creative way to draw us all in and destroy us. The performances from the young people involved, mainly Roman Griffin Davis, Thomasin McKenzie, and Archie Yates, allow you to experience a world event from a fresh new perspective. I was also pleasantly surprised with how funny this film truly was. 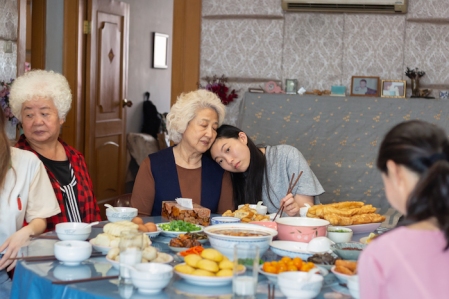 Lulu Wang’s family dramedy introduces us to a new culture in a way we haven’t necessarily seen before in films released in the U.S.. At the beginning of the film you feel very confident in your beliefs and by the end you are questioning everything. It really is just a heartwarming story about the love we have for our elders and how they shape us. While the story itself is quite heavy, a great performance by Awkwafina provides  balance.

This is probably the film that came out this year that I have seen the most because I make anyone who steps into my home watch it.  It is just fucking hilarious. Beanie Feldstein and Kaitlyn Dever have amazing chemistry, and as a woman, it really made me reflect on a similar time in my life with my best friend. It tells a realistic story of two female friends without the bullshit drama that often comes along with the portrayal of female friendship on screen.

This was by far the most fun movie of the year in my opinion. I really am not going to say much about it other than go see it!! Rian Johnson really redeemed himself after the whole Star Wars debacle and created a fun and surprising whodunnit comedy with a cast that was really up to the challenge.

We went to see this on a whim and I am so happy we did. This has been a comeback year for Shia LaBeouf and I really didn’t see that coming. And this film also gave us one of the best break out performances of the year from Zack Gottsagen. The screenplay was beautifully written, it was competently directed, and really was just a heartwarming story.

If there was any doubt before that I was actually a middle-aged white man trapped in the body of a 20-something year old woman, my love for this movie really proves it. Christian Bale and Matt Damon helm a cast of characters that take us on a journey that never stops before the credits role. The racing sequences were very well done and create a sense of tension that just keeps increasing until the final scene.

Since marrying Nate, I have had no choice but to become an Elton John fan. Not that I wasn’t a fan before, just more of a distant admirer. This film was probably both the one we looked forward to the most this year and the one we were most afraid of. Thankfully though, Taron Egerton plays EJ masterfully and really nails his voice. The fantasy biopic is bright, colorful in many ways, and really gives you a look inside the musical career and struggles of one of the greatest musicians of our lifetime.

We just saw this one yesterday and because of the timing we probably won’t get a full review up. However, I loved this film. It had me on the edge of my seat literally the entire time. Adam Sandler really can act. I just wish he had started a long time ago. His portrayal of Howard Ratner is one that I will be thinking about for years to come. The way that the Safdie Brothers use sound to create tension (characters talking over each other, loud noises in the background, etc.) is brilliant. This is one of those films that is so hard to watch but you can’t turn away. You feel the world crashing down around a character and you just want to grab them by the collar and tell them to get their shit together. But you can’t. You have to just sit there and watch it happen.

Thank you for sticking around with us for another year! We are forever grateful that you continue to read our content and we look forward to writing more for you in the coming year!