Crawl is B movie paradise. Director Alexandre Aja has interrupted this franchise and sequel dominated summer with a kick-ass old school thriller. It’s short, it’s gory, it’s legitimately scary in parts, and I had a fun afternoon watching it.

If you’ve seen the trailer, you pretty much know the plot. A young woman named Haley (Kaya Scodelario) braves an approaching category 5 hurricane to check in on her father (Barry Pepper) and they became trapped in rising flood waters in his house along with a few other guests: some big-ass alligators. That’s the plot, and after about the first 20 minutes or so, the remaining hour of this film is an epic, claustrophobic fun house of mankind versus monsters. 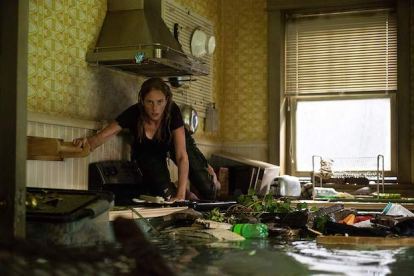 Going in to this movie I had seen the trailer and was aware that the budget was $13.5 million, so I honestly expected the technical aspects to be so-so and to see very little of the alligators. Since trailers of late seem to give a lot of the best parts of films away, I expected the shots we saw of the gators in the trailer to be about it, with the rest of the film implying that the creatures were stalking the humans Open Water style. That theory was shot to hell very quickly, but in a good way. We see a lot of the gators, but the visuals are never over-used to the degree that they kill the suspense. I’m very impressed with how this turned out on such a small budget. The gators look realistic, as does the rain and floodwater. Yes, there are some shots of storm clouds that look incredibly fake, but most of the money used here was well spent and the crew got a lot of mileage out of it.

I’m hesitant to pick at aspects of the script, but I do think the writing is worth discussing because it can still highlight differences between a good B-movie, which this is, and a bad B-movie,  which includes the likes of last years insanely and undeservedly profitable The Meg.  Unlike that disaster, there wasn’t a moment in this film where I laughed at any of the choices made by the actors. There was some intentional comic relief that caused me to chuckle a few times, but the acting, to the degree that acting is required in a film like this, wasn’t laughable or embarrassing. The dialogue, on the other hand, had some clunky moments. There is a subplot about Haley’s strained relationship with her father that to some extent needs to be there so that we bond with the characters, but it is given more screen time than necessary. It’s heavy handed at times. In other moments though, the dialogue does a nice job of foreshadowing later actions. As far as B movie killer animal scripts go, you could do a lot worse than this. I’ll say I had to suspend disbelief less than I thought I would, though there was a shower scene that made me question how such a large reptile would be unable to just shatter the glass door.

One final thing I want to discuss is how this movie is performing at the box office right now. I hope that word of mouth spreads and this starts to do better. That’s a rare occurrence these days but this is a well-crafted horror movie that fans of the genre really should get out there and see. Crawl is poised to make around $10 million this weekend, and that’s not terrible for a film that cost $13 million, but this is the kind of movie that should have a bigger audience, and is even more fun with a big audience. The 6-8 of us that were in the auditorium for the show Alex and I saw had a great time. There was cheering, clapping, gasping and, when appropriate, laughter. That’s part of the fun with films like this. It’s a shame to go and see something, even a just dumb enough bit of summer escapism like this, that’s made this well and has such a small audience.

Paramount might partly be to blame. If you’ve been following this film on Rotten Tomatoes, you’ve probably noticed it wasn’t screened for critics until Thursday night, when it opened nationally. That had to hurt Crawl at least a little bit. Given the score it has on Rotten Tomatoes now that reviews are coming in, Paramount missed a shot at generating some advance buzz. That’s unfortunate. Maybe it’s not too late though. My advice is to carve out 90 minutes in your schedule and see Crawl ASAP, if you can stomach this kind of thing.

I have been making fun of this film since I first saw the trailer. However, it looked like just the type of terrible, cheesy, and unbelievable film that I crave this time of year. Let me just start by saying that the trailer does this film no justice. For once, a trailer did not give away the best parts.

One of the biggest problems that I thought I would have was the set up. I really was not able to imagine a world in which a filmmaker could successfully set up a premise like this and actually make it work. I mean how the hell are alligators going to get into a house?? But I was wrong. Honestly, the first ten minutes really set up where this film is headed. I could have done with a little less of the family drama because the plot really didn’t need it. But it wasn’t enough that it derailed the entire story. Off the top of my head, there is only one scene I can think of that really messed up the pacing.

I was also pleasantly surprised by the script and the action shots. I was expecting a cringeworthy script that we could laugh about later. There were only a handful of lines that were cheesy or out of place. And even then, when you take into consideration what is happening in this film overall, it doesn’t matter. I mean there are alligators in the house…you have to suspend some level of disbelief. However, the action sequences in this film make it easy to do. They are shockingly realistic. For the budget the crew had, they used it well. The alligators were scary and unsettling as hell to watch swim through the house and the hurricane itself was also well constructed in terms of a backdrop for this story. With that being said, if you aren’t a fan of gore, this one might not be for you.

I hate to be super vague in this review. This is one you have to see for yourself though. This was such an unexpectedly fun viewing experience that I would hate to take that away from anyone. Don’t think you are walking in to see a cinematic masterpiece. It’s well done, but it really is just a film about alligators in a house.