I have to tell a story before getting to my review. Shortly after Alex and I arrived at the theater, we were surprised to see a man sit down a few seats away from us with his two young (under 10 I believe) children.  An R-rated Seth Rogen comedy seemed like an odd place for a family with small children, but then again I’ve seen people bring kids to a lot of inappropriate events. The first few trailers were for things like Men in Black: International and some dumb looking action movie called Anna. Then the red band appeared on-screen. The second-hand discomfort over the awkward position I knew this father was about to be in was overwhelming, and then this trailer for Good Boys began. Those young kids a few seats away got an education! As the trailer ended, one of them, who was too young to know what the red band meant, asked “Is that one R-rated?” Another red band trailer followed, and then Long Shot started. The opening  was enough to finally make the father realize he and his kids were in the wrong auditorium. At this point, I was so amused by what was going on around us, I was worried Long Shot would not be funnier. Fortunately, it was.

Normally, Nathan and I have really terrible movie-going experiences. It was a nice change of pace to watch someone else go through an ordeal, and to have it end just in time for us to focus on the movie we came to see. The only other person in the auditorium (we saw an early show) was a 60+ year old woman who arguably found the film funnier than we did. That is, up until the point they started making jokes about the Republican party. At that point she went silent. She was all about those dick jokes though.

Ok, I’m a little rusty since I have taken some time off from writing to get adjusted to my new job and such, but I do remember that I need to choose my movie crush from the film to rave about and that person was by far Charlize Theron. I have seen her do comedy before, but in this film, she took it to a new level. She was hilarious, authentic, and unapologetic in her performance. Theron plays Charlotte Field, current Secretary of State,  who is seeking a bid for the 2020 presidency. This character is brilliantly written. She is tough, driven, and invested in making the world a better place. She is not your typical ball-busting female protagonist. Don’t get me wrong, she is a total bad ass, but she also has a softer side to her. Often times, when it comes to female characters, they are one of those extremes or the other. The writers struck a nice, more realistic balance with this character. Charlotte wrestles with a genuine struggle that a lot of powerful women face: happiness or career success. While this film does take on the typical rom-com story structure, it is unique in that, for once, the woman isn’t the one that is forced to change herself to find love. I promise I will not spoil anything for you, just know that in some ways the gender roles are turned upside down.

I’m the last person arguing for more male wish-fulfillment comedies where an underdog average Joe pursues a woman most of those around him would consider to be out of his league. It’s a tired trope that usually lends itself easily to scripts full of double-standards and misogyny. Fortunately, writers Dan Sterling and Liz Hannah (the latter of whom co-wrote The Post) are interested in much more than a guy-gets-girl story for the sake of dick jokes (but there are a lot of dick jokes). The script draws upon familiar source material such as The American President but switches gender roles to make larger points about sexism and political power.  It’s a film full of familiar tropes, but those weaknesses are overcome by the script’s attention to female characters. The chemistry between Rogen and Theron is excellent as well.

If you go into this film looking for your typical Seth Rogen comedy, you will not be disappointed. This is one of my favorite films he has been involved with. There are plenty of dick jokes, weed, and underdog moments to go around. His performance is also pretty good. There is an odd sense of maturity around his character that you don’t often get from him. It was refreshing.

I agree that Rogen gets to do the typical Rogen schtick, albeit with a little more emotional depth to balance it out than usual.  There are few Rogen performances I dislike, but this is one of his better roles. His character, Fred Flarsky, has some personality traits you’ll recognize from countless other Rogen roles, but with one key difference: You typically watch a Seth Rogen film because you want to laugh at his characters, but Long Shot provides several opportunities to cheer for him. Director Jonathan Levine has a knack for pointing out the unpolished, sloppy edges of Fred while also honing in on moments that work against the slacker persona Rogen usually brings to his roles. Levine hinted at this possibility in 50/50 when we saw Kyle’s (Rogen)  bathroom reading material; a book about helping a friend battle cancer. What makes Fred Flarsky different from what we’ve seen in the past is that we get the more mature side much earlier in the film. He’s fighting the good fight as a journalist unwilling to sell out to a media organization clearly modeled after both Fox News and Sinclair. He has principles and is presented with heavy choices we’re not used to seeing a Rogen character address.

Charlize Theron once again proves her versatility. We have seen her comedic side before, particularly in Young Adult, but she proves equally well-suited for a raunchy, mainstream romantic comedy. She draws as many big laughs, if not more, than Rogen. Their scenes together are delightful, yet she steals the show with a bit where she handles an international crisis while very much under the influence of Molly.

The supporting cast is enjoyable as well. We are treated to Bob Odenkirk playing a celebrity turned President and Andy Serkis creating a killer composite of conservative media moguls such as Roger Ailes and Rupert Murdoch. O’Shea Jackson Jr. also ups the laugh quotient with a third act reveal that I won’t spoil here. 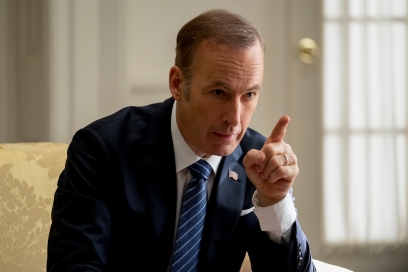 The comedy in this film was great. A lot of it comes from the parallels that were drawn between this world and the real-life politicians and current events we have been cursed with. I also enjoyed Bob Odenkirk’s TV actor turned president. As Nate already suggested, Wembley News has a striking resemblance to Fox News, and Mr. Wembley himself is meant to be a Rupert Murdoch type character. A lot of the laughs come jokes directed at the absurdness of the reality we are living in. The cast of supporting characters, mainly June Diane Raphael, Andy Serkis, and O’Shea Jackson Jr., hold their own in the comedy arena.

All in all, I found this to be a really enjoyable film. It was a refreshing spin on a rom-com even though it depended on many of the tropes of the genre. The fresh feminist approach to the narrative made it a story that all women will find relatable in some way. For once, it was nice to have a female protagonist who was powerful, sexy, flawed and uncompromising. I think the writing and performances really made this film what it was.

It’s not groundbreaking comedy or political satire, but it’s a brisk, enjoyable two-hours that I’m looking forward to watching again and a solid comedic showcase for the entire cast.