There are many directors you could cite as likely influences on the way Damien Chazelle (Whiplash, La La Land) has decided to tell the story of Neil Armstrong and his eight year quest to land on the moon. Some obvious names are Stanley Kubrick, Alfonso Cauron and Christopher Nolan. Yet I’m willing to speculate that perhaps the biggest influence was Kathryn Bigelow, as “First Man” unfolds like the NASA equivalent of “Zero Dark Thirty.”

If you are unfamiliar, “Zero Dark Thirty” is a nearly three hour dramatization of the hunt for Osama Bin Laden. That story is told through the eyes of a composite character named Maya. It’s a film that at almost every turn resisted the chance to become over the top. It covered immense ground without feeling rushed. Many of that film’s most intense sequences lacked music, relying solely on diegetic sound.  Though the topic is very different, Chazelle handles most of his characters and visuals in “First Man” with a similar style. Almost everything on screen is depicted with a matter of fact tone. Few developments are lingered over or dramatized beyond their occurrence. “First Man” adopts the stoic nature of its protagonist with mostly successful results.

The film follows Neil Armstrong (Ryan Gosling) as he is recruited by NASA and begins training for an eventual flight to the moon. He is joined by Buzz Aldrin (Corey Stoll) and Ed White (Jason Clarke), and is supervised by Chief of the Astronaut Office Deke Slayton (Kyle Chandler). Armstrong’s training and missions put additional strain on his marriage to Janet Shearon (Claire Foy), which was already rocky due to a family tragedy. These family scenes offer a mixed bag. Some work well but others kill the pacing a bit without adding much. The best ones, however, offer some explanation into Armstrong’s very quiet, almost mysterious persona. These scenes also feature the best acting in the film. Gosling is fine throughout, but never outdoes an early scene where he breaks down alone in a dark room. Foy gives the best performance in the film, and her Emmy award could soon have some company via the Academy of Motion Picture Arts and Sciences.

The space sequences are exhilarating. A few of them are among the most intense action sequences I’ve ever seen. Expect the sound crew to have a very fruitful awards season run. Chazelle and composer Justin Hurwitz also make the wise decision to avoid using music for most of the space sequences. When they do use music in space, it’s not great, especially during a docking sequence where Hurwitz tries to evoke comparisons to 2001: A Space Odyssey. It ends up sounding cheesy and not appropriate for the mood. That said, this film has an awesome score. It is mostly soft and subtle, evoking the sadness Armstrong carries with him. It’s haunting stuff, and the main theme is an earworm. Those strings have managed to, temporarily at least, knock “Shallow” and “Always Remember Us This Way” out of my head. The Oscar music categories are going to be solid this year.

“First Man” does have some technical issues. One that I noticed in the first sequence and which continued through in later scenes is that Chazelle and cinematographer Linus Sandgren overuse the shaky camera effect a bit. This film was reportedly shot mostly with handheld cameras and it shows. That’s fine, but occasionally the shakiness is so intense we can’t make out anything on screen. Maybe that’s the point, to make the viewer as disoriented as an astronaut during takeoff, but it gets obnoxious after a while. There’s also an over-abundance of close-up shots of characters’ faces and an unusual reliance on letting the backs of characters’ heads dominate the frame.

The film’s biggest flaw to me though occurred while several Apollo 11 crew members are making their descent onto the moon’s surface. At this point, Chazelle and Hurwitz abandon the restraint they had practiced for the previous 100 minutes or so and bring in very typical overly-dramatic historical film music. It helps demonstrate another issue with spending so much time depicting the landing: it isn’t where the drama is coming from at this point of the film. A lot of viewers may not be as familiar with the Gemini 8 mission or a lot of the tests that occurred before the Apollo 11 mission, so really driving home the life and death aspect of those events works. The moon landing though, as much as it was life or death for the people on board, is never going to be as thrilling as Chazelle is attempting to make it, because everyone knows the outcome. The drama at this point in the film should be on what Armstrong is going to do once he is walking on the moon’s surface, something that screenwriter Josh Singer worked hard to foreshadow.

Since I am discussing what Armstrong does on the moon, I guess I need to address a controversy that has erupted. One thing the moon sequence does not include is a depiction of Armstrong planting the American flag. This led to the film being criticized by Buzz Aldrin, Donald Trump and many others, especially those on the right, for being anti-American or anti-patriotic.  Of course, many of these complaints have come from people who hadn’t yet seen the film.

I haven’t done any reading up on why Chazelle chose to exclude that imagery, but having seen the entire film it clearly has nothing to do with any sort of anti-American sentiment. In fact, this movie is loaded with patriotic imagery. There is a scene where Chazelle shows one of Armstrong’s sons hanging an American flag outside his parents’ home. There is much flag waving onscreen in the aftermath of moon landing, and there are lines of dialogue throughout that relay how important this mission was for America, and how America meeting this goal was a good thing for much of the free world. Please do not let the whole flag controversy scare you off from seeing this. I’ll admit I’m not one who cares at all if a film is patriotic or not. That’s not criteria I use to judge any film. I can tell you though that any suggestion that this is an anti-American work is absurd. 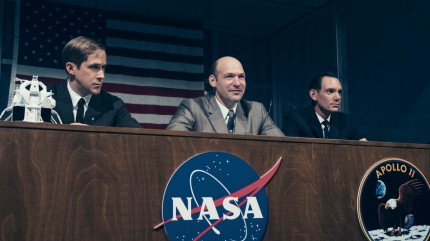 This is one of those rare movies where not even half way through my first viewing I was ready to buy a ticket to watch a second time. I left the theater with that feeling. I did not stay to see it a second time though. I had to go home and prepare a nice dinner for Alex as a way to apologize for seeing “First Man” without her. On the other hand, I’ll just have to take her to see it soon, and I’m eager to do so.