“Ready Player One,” directed by Steven Spielberg, is exactly the movie you think it is going to be from the trailers. It’s a nostalgic sci-fi journey that is chock full of references to films that would be far more thrilling to watch. There are some nifty special effects, fun music choices and a pretty awesome villain (Ben Mendelsohn), but that just isn’t enough to keep this nearly two and a half hour adventure from lagging. It’s a movie that hastily introduces the poverty stricken future world our characters inhabit, then spends most of its running time asking us to just watch them escape into a virtual world. We don’t learn enough about the real-world they are avoiding to understand why these characters spend their entire days in the virtual world known as the OASIS. 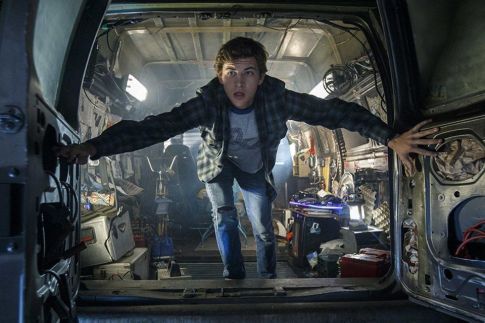 The film opens in Columbus, Ohio in 2045, and we are introduced to Wade Watts (Tye Sheridan) a “Gunter” (OASIS term for egg hunter) who is on a team of players known as High Five. They, like many others in the real-world, are obsessed with finding the location of the Easter Egg left within the OASIS by its deceased creator James Halliday (Mark Rylance, terrific as usual). The Gunter who finds the egg will be granted full ownership of the OASIS, which, as you can imagine, means a considerable amount of wealth and power. In order to find the Easter egg, players have to collect keys and other clues. We also learn that some teams have more noble intentions in their quest to find the Easter Egg than others. After Wade finds the first key, he and High Five race against IOI, a company that is using debt-indentured players to search for the Easter Egg. Nolan Sorento (Mendelsohn) is the company’s CEO and the most interesting part of the film.

The world of the OASIS relies on constant references to pop culture. It makes senses that players would want to escape into a world with familiar fictional characters. What’s odd about it is that the movie is set in 2045, and nearly all of the pop culture references are to media from the 70s through 90s, which results in much of the film feeling not only dated, but tiresome. I love “Back to the Future” as much as the next nerd, but using the DeLorean in a car chase isn’t necessary, especially when none of the vehicle’s time-traveling capabilities are utilized in the plot. There is a funny bit involving Chucky, but the pop culture references are just there. They don’t add any dimension to the story or characters.

From a technical standpoint, I don’t think I’ve ever been so disappointed by a Spielberg work. A lot of this film looks like it was shot by Michael Bay. There is a potentially exhilarating auto race early on, but we are not given the visual space to appreciate it. The composition focuses on so many cars that look alike being smashed and crushed one after the other by other drivers and movie monsters. The way it is shot is such a mess. Spielberg and cinematographer Janusz Kaminski usually create coherent, riveting action sequences, but in ”Ready Player One” what appears on screen is too often incoherent machine on machine porn. 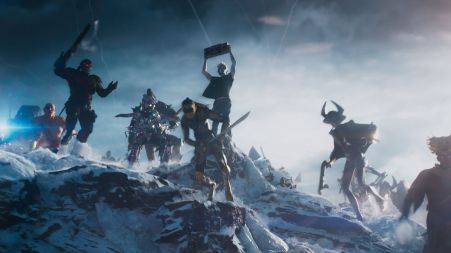 Later in the film, there is an action sequence that looks like the climactic battle in “Star Wars: Attack of the Clones,” except in a snowy setting, with an appearance by Chucky and references to “Lord of the Rings.” The reason for all of that, I guess, is that someone thought it would be cool.

“Ready Player One” could tell an interesting story. The framework for one exists here, but much like the Gunters at the beginning of the story, the filmmakers don’t seem to know where to look. By the time they figure out, it’s too late to save the movie from itself. Screenwriters Zak Penn and Ernest Cline spoon feed us a lesson in the last 10 minutes that the rest of the film was too busy trying to be clever to adequately set up.