This movie has everything I love it in: a badass female lead, sleazy men getting what they deserve, and an amazing screenplay. Aaron Sorkin’s directorial debut was everything that I expected from him and so much more. As per usual, the screen play was masterfully written and performance by Jessica Chastain was nothing short of amazing. Often times, books don’t translate well to film. However, this was a great adaptation.

The first ten minutes of the film were great. It set the story up so well and establishes Molly (Chastain) as the bad ass woman that she is. Molly Bloom is a former Olympic skier who bounced back from a horrific childhood injury to compete at the highest level, only to crash and burn at the Olympic Games. Molly comes from a broken family where her father pressured her too much as a child. She has two brothers, one of which is a genius and another who is also an Olympic athlete. In the end you find that the entire story comes back to her upbringing and her issues with her father. The emotions that Molly feels towards her father and the resentment she feels towards her brothers makes her a realistic, raw, and emotional character. The casting of Jessica Chastain in this role was perfect. As with all of Aaron Sorkin’s screenplays, it was fast paced and witty. Chastain pulled it off masterfully. The first ten minutes of the film includes so much fast paced and meaningful dialogue that I don’t think it would have been as spectacular with anyone other than Chastain behind the words.

The entire story revolves around Molly’s failed sports career, the high stakes poker ring that wins her millions, and her eventual downfall. One thing that I loved about this story was that Molly was a powerful and sexy woman who was not turned into a sex symbol. She was not treated as an object, and it was refreshing. And it is so sad that in the year 2018 that I have to say that. Of course, a lot of the players at her games profess their love to her. But she stands by her beliefs and refuses to compromise. Often times in film, we see powerful female characters brought down by sex. Time after time, she turned down powerful and rich men in order to maintain her integrity. The other great thing about Molly is that she builds her empire on her own. It’s not often that we see a woman build something so large and profitable without there being a man by her side. She enters the poker world because of her boss Dean Keith (Jeremy Strong). However, once he reveals himself to be the terrible person that he is, she strikes out on her own and steals his game. The backhandedness and deceit that she displays at times is often reserved for male characters. However, in the real world, we all know that women do display these traits. It is great that we are finally getting to the point in film where women can display negative traits while still being portrayed as feminine. 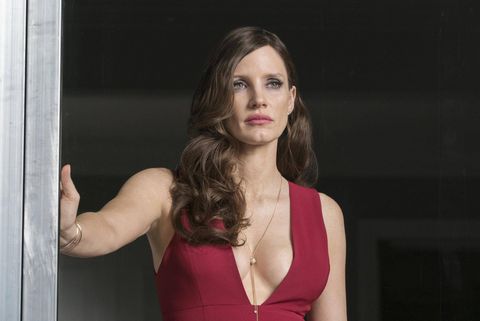 Now, moving on to my film crush of the week. I think I will make this a regular segment in my blog. This week’s award goes to the one and only Idris Elba. I mean he could have had his shirt off a lot more, but other than that his performance was great. It was really interesting to watch his and Molly’s relationship develop on screen. In the beginning, Charlie (Elba) obviously does not trust or believe in Molly or what she is telling him. He is skeptical, and rightfully so. Every time he has the opportunity to wow viewers, he does. There were several moments during the film when I asked myself why the hell this man does not have an Oscar yet. There is one scene in particular, towards the end of the film, where he and Molly are in a room with the prosecutors, where Charlie has such a well written and passionate monologue in Molly’s defense, that I was ready to hire him as my lawyer for a crime I have yet to commit. His performance in this film was surprising, passionate, and so well executed.

As with most Sorkin related projects, my biggest complaint about this film is that it could have been twenty minutes shorter. I realize that this film was about a high stakes poker ring, however, to me the more meaningful parts of this film were Molly and Charlie’s relationship and Molly coming to terms with her family and her childhood. I would have liked to see less of the poker games and more of the subsequent trial and the rebuilding of Molly’s life. To me, these characters were too interesting to not focus on them more.

With that being said though, I very much enjoyed this film. The screenplay and acting were top notch. The adaptation of this film was amazing. The characters felt real and relatable. The story was riveting and kept me on my toes. I was a little skeptical about Aaron Sorkin slipping into the role of director, but I am excited to see what his next project will be.

We’ve hit a pattern lately of focusing on works that in some way or other serve as a type of comfort food for their fans.  “Star Wars: The Last Jedi” saw the welcome return of Jedi Luke Skywalker to our screens (the 30 seconds he was in “The Force Awakens” just doesn’t count much). Earlier this week we discussed “Roseanne,” which many viewers felt was a welcome return to a family they’ve loved for a long time. Now we move on to what is, for me, the greatest comfort food of all: Aaron Sorkin’s writing. It is not by any means realistic. It’s occasionally too clever or smug for its own good. But for those of us who have seen every episode of “The West Wing” and “The Newsroom,” the rhythm, wit and punch packed in Sorkin’s dialogue heavy scripts is an irresistible drug. As one character in the film states, “Bring us Molly…we need Molly.” The line is joke at the expense of two attorneys for the U.S. government, who think the poker players overheard saying the phrases were referring to Molly Bloom (Jessica Chastain), a former Olympic athlete who started an underground poker empire. The players were actually referring to the drug Molly.  “We need Molly” is also what I thought when I found out early last year about this film, and that it would be written and directed by Aaron Sorkin. Did it live up to my expectations? Well…

From a screenwriting standpoint, hell yeah it does. Though never as funny or intriguing as “The Social Network,” Sorkin’s work here is still top notch. This is rapid fire dialogue for those who can actually sit through a film without uttering a peep. This is an acting and writing showcase, and, aside from the opening sequence, would work quite well as a play. The drawback is, the film would work quite well as a play, and unlike Denzel Washington’s wise handling of “Fences” last year, Sorkin tries to elevate the performances with some cheap editing tricks that are more distracting than illuminating. Some restraint next time would be better. In this outing, Sorkin seems a bit unsure of what he wants to do with the film, copying many of the styles that worked for Bennet Miller in “Moneyball,” which Sorkin co-wrote with Steve Zallian. Graphics that help explain poker and skiing appear onscreen several times. Occasionally they are helpful, but often they are unnecessary, as the drama doesn’t come from understanding the game so much as why characters are hooked on playing it or what parts of their lives they are neglecting by doing so. 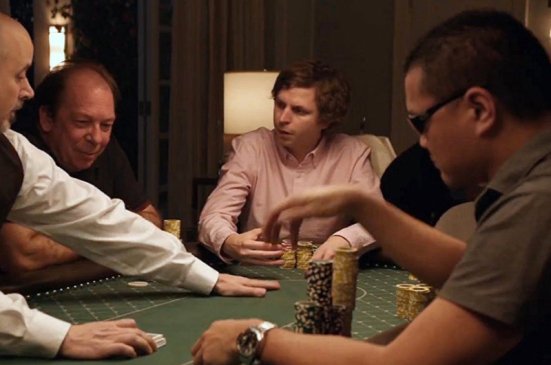 Sorkin also relies heavily on fades. It didn’t bother me much the first time I saw the film, but it did the second. It comes down a bit to preference, but I feel fades work better when using them to mark a significant passage of time. Here, Sorkin uses four, five, even six fades within one scene even though the passage of time is only a couple minutes, Cuts would have sufficed, or just writing the scene differently, instead of relying on such a heavy handed style.

Aside from Chastain, the cast is great throughout, especially Idris Elba as Bloom’s defense attorney Charlie Jaffey, and Michael Cera as Player X, who is a composite of several Hollywood actors who were gamblers in Molly’s poker games. This is Chastain’s show though, and she shows us every side there is to Molly without the film ever having to take an unnecessary look into what love life she may or may not have. There is mention of a boyfriend or two, but it is a fleeting reference. It is a little disappointing that the script veers in the direction of placing all the explanation behind Molly’s life choices at the feet of her strained relationship with her father (Kevin Costner).

The reliance on a psychiatric evaluation near the film’s climax to explain everything reminded me of “Noel,” an episode from season two of “The West Wing” where Josh is forced to address his PTSD after a violent episode, and “Bullies,” a season one episode of “The Newsroom” where Will sees a psychiatrist after battling insomnia and harassing an aide to presidential Candidate Rick Santorum on live TV. Sorkin likes to use interactions between a patient and a psychiatrist as a plot device. Each example I’ve mentioned works, but Sorkin seems to be very dependent on this trick, and it would be nice to see him explore other mechanisms to keep the plot going. I should note that I have not read Molly Bloom’s book “Molly’s Game: From Hollywood’s Elite to Wall Street’s Billionaire Boys Club, My High-Stakes Adventure in the World of Underground Poker,” (a title which gives Sorkin’s long-windedness a run for its money), so I don’t know if the aforementioned interaction between Bloom and her psychiatrist father appears in it. If so, I would have to excuse Sorkin a bit for going the psych eval route again.

I’m rambling on and picking at this movie a lot. Credit it to me working hard to take issues with things I love in the name of being objective. This is a movie with several great performances, snappy writing and sexy costume design. I’m looking forward to watching it again, and can’t wait to see what Sorkin writes next. His directing is fine for a first outing. Hopefully it improves from here.